Chaos has failed to destroy the Protoculture Center and have lost Mikumo to the Kingdom of Windermere, but they recover the flight recorder of Wright’s VF-22, revealing that he was a spy but he had deviated from his mission to destroy the capital city’s Protoculture ruins; instead, he tried to drop the dimensional bomb elsewhere to keep casualties to a minimum. Berger arrives and discusses about Mikumo and the effects of delta waves. Meanwhile, Roid plans to have Mikumo sing at the newly risen Star Temple on Ragna and N.U.N.S sends the 47th Special Fleet into the Brísingr Cluster, armed with dimensional weapons. The Macross Elysion heads to Ragna for a final showdown with the Kingdom of Windermere. To display the might of the kingdom, Heinz commands Mikumo to sing the Song of the Stars, infecting the N.U.N.S. fleet with the Vár Syndrome and causing them to detonate the dimensional bombs on themselves, resulting the annihilation of the whole N.U.N.S. fleet. 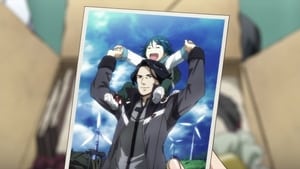