The first day of the individuals tournament begins. Tōka faces off against Tsuruga’s Kaori and is beaten by her beginner’s luck. Another Tsuruga girl informs her team mates of an opponent who was strong during south winds. Despite pressure from being the team champions, Kiyosumi manage to get through, though Kyōtarō, who had been participating in the boys tournament, is knocked out. In the second half, Mihoko ends up facing against Hisa, who still does not remember her. With Hisa ahead, Mihoko decides to use her right eye to win the game. Hisa finally remembers who she is and Mihoko gets her long awaited conversation. The first day ends with all of Kiyosumi’s players progressing. Yūki, who had a winning streak all day, psyches herself up for the next day. 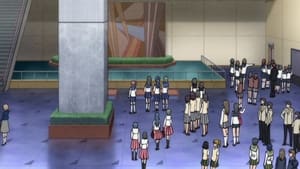