It is the second day of the individuals, and Yūki is shocked to find the day will consist of east-south round games. Yūki gets off to a good start in her first match, but when the south wind approaches, Kazue Nanpo from Hirataki High School shows off her field advantage and wins the game. During the midway point, Nodoka is shocked to find Saki has gone back to her habit of scoring plus minus zero, and goes to confront her about it. Saki had been holding back since it was Hisa’s only chance at the individuals, but Nodoka reminds her that their promise included not holding back. Saki ends up in a match against Hisa, as well as Momoko and Tomoki. Hisa immediately concocts a strategy to seal off Saki’s rinshan kaihō strategy, which eventually convinces the others to gang up on her. Later on though, Momoko, determined to avenge Yumi’s earlier lost against Saki during the team tournament, decides to implement her stealth tactic in order to win. 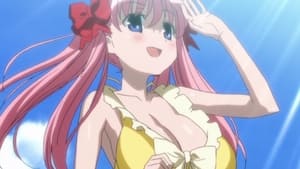