Nodoka walks into her match holding her penguin stuffed animal which causes a stir among the observers and her own opponents. Nodoka plays extremely well, and of the competitors from Ryūmonbuchi, Tōka, notices her similarities to a famous skilled online mahjong player known as Nodocchi. She tries telling this to her teammates, but they still do not think it can be true. Saki makes short work of her round by taking the remaining points from one of the players, and the team progresses on to the semi-finals round. In the semi-finals, Saki’s team makes it through to the finals, along with Ryūmonbuchi, Kazekoshi, and Tsuruga Academy. One of the members from Kazekoshi, Kana Ikeda, gets harsh treatment from their coach for not playing up to her expectations, despite the fact they made it to the finals. The captain of the the team, Mihoko Fukuji protects Kana, and after the coach leaves, the captain encourages her teammates in showing everyone that their school is the best. 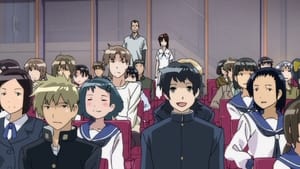