The Kiyosumi team takes the train back to town since they do not have enough money to stay in a hotel near the tournament. Hisa tells Mako how she was the reason why Hisa held on to the hope that more girls would join the mahjong club the next year so that they could go to the prefectural tournament together. Nodoka recounts to Saki how she used to play mahjong only on the Internet due to lack of players, but after entering junior-high school met Yūki and others, leading them to enter into the junior-high tournament, though only Nodoka advanced. The girls from Kazekoshi talk about how their captain, Mihoko Fukuji, does most of the work for the club, and since it is her last year, they want to play as hard as they can so they can go to the national tournament. Tōka dispatches a butler to bring Koromo Amae to the tournament, who had been sleeping all day. 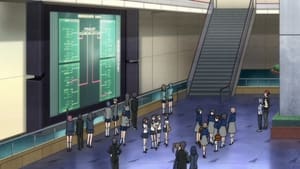